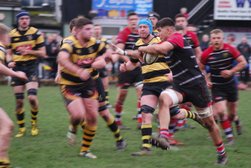 Lydney 29 – Weston Hornets 15
Another massive game as the loser would be in pushed into relegation trouble, visiting Hornets who are just two places above Lydney, arrived with a strong team. The home team decimated by injuries had to even call upon their aging Coach Lee Fortey to start the match. However, it was the vast experience of front rower Fortey that galvanised the Lydney pack into dominating the game and was to prove the decisive factor.
Hornets started the brighter but it was the Severnsiders in front of a large Regentsholme, crowd who were to dominate, ably lead by Fortey organising the forwards who soon had the visiting pack on the retreat at the set piece. It was following a good forward drive from Fortey that Sam Arnott got the backs moving, fullback Alex Nelmes joined the line and shipped a brilliant pass to allow Henry Sleeman to cut through and score the opening try for 5 – 0. Fortey was now using all his experience to manage the game drove his pack on relentlessly, following a string of penalties and the dominant Lydney pack opting for the scrum each time gave the official no option but to award a penalty try for 12 – 0 after just 20 minutes. Any hope of a Hornets attack was quickly eliminated by the strong tackling Lydney backline with centre Joe McClean in superb form with some massive hits. On 35 minutes, a Joe Hamlin penalty hit the post only to be gathered by the Lydney pack who following a series of drives for the line saw Jake Bonsor crash over, with the try converted by Joe Hamlin the lead extended to 19 – 0. Hornets still trying to move the ball and break up play were awarded a penalty just on halftime which was kicked to make it 19 – 3 at the break.
Hornets regrouped starting the second half strongly and their speedy backs finally crossed with James scoring out wide for 19 – 10. The Severnsiders were not taking a backward step today but even without Fortey who was replaced late in the first half saw the pack continue to dominate with excellent performances from Harry Brown, Callum Thompson and James Pugh. From yet more forward drives, Nathan Ford was brought down just short and scrum half Sam Arnott found a gap to score, the conversion added made it 20 – 10 after 70 minutes. More good breaks from Dave Bennet and Tai Lacabuka were unlucky not to result in further scores. As the game continued, the solid Lydney defence forced Hornets to run from deep but the tough tackling Joe McClean was organising a solid back defensive line ably supported by youngsters Nelmes and Sleeman. With the game entering the closing stages a good midfield break by Sam Arnott ended with a Hornets infringement and a penalty within range for Joe Hamlin who confidently knocked it over for 29 – 10. Deep into injury time a Hornets did get a consolation try for a final score of 29 – 15
Coach Lee Fortey was delighted with the performance adding “very pleased with the discipline we showed, they came to break up the game, run everything with their speedy backs. We kept to our plan of high intensity play, but importantly adopted our style to control the game once our pack was in the ascendency and ran out deserved winners with a very solid performance from all 18 players. The forwards put a real shift in today, our defence was excellent but it was our patience that was most pleasing, as we got points virtually every time we were in the scoring zone. I will be challenging the players for more next week as we have a very winnable game away at Cullompton to put us back in the top half of the table”