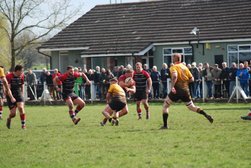 Lydney 31 - Keynsham 7
With four wins on the spin the Severnsiders were looking to continue their unbeaten run, a glorious spring day saw Keynsham visit with their large pack who were sure to cause the hosts problems. However, it was Lydney who dominated the opening exchanges committing the visitors to numerous tackles. An early Lydney penalty was missed and the game remained scoreless for over 20 minutes. Some good Keynsham pressure saw Lydney give away some penalties ending with Callum Thompson being sent to the bin. However, the Severnsiders defence remained solid and the visitors were unable to create much from a succession of penalties. On the half hour Lydney made a good defensive break, recycling on half way saw Tai Lakabuka go on a weaving run beating numerous tackles to score the opening try, with Nathen Tucker converting Lyd had the lead at 7 – 0. More good Lydney pressure followed and good forward drives saw a good break by the impressive Harry Brown, the ball recycled was fed to Costner Lane to crash over for the second try, converted by Tucker for 14 – 0. The Severnsiders now pressed on and from the kick off the backs attacked with multiple offloads that really deserved a score. The away side then conceded a penalty on the 5m line but recapture the possession to move play to the 22m, regaining the ball a good move sees the play switched to the blind side where Tai Lakabuka collects at pace to run in a good try to extend the score to 19 – 0 which ended the first half. The game restarted with more Lydney pressure, Dave Bennet won good line out ball on the 5-metre line which prompted a forward interchange before Nathan Ford drives over for a try, again converted by Tucker for 26 – 0. With confidence flowing the Severnsiders were dominating the game, on 65 minutes a good break from Sam Arnott offloaded to winger Conner Mills who sped down the touchline only to be tackled just short of the line, a good offload to the supporting Joe Hamlin gave Lydney a well-deserved score for 31 – 0. The visitors would not give up and from a series of penalties their big pack had a number of catch and drives ending with Phil Harvey scoring a converted try for 31 -7. The Severnsiders again dominated the closing encounters and got a well-deserved five points for a final score of 31 -7
Coach Dave Emery said “a very workman like performance gave us another win. We perhaps were not at the pace of previous weeks but the visitor’s tactics combined with the official’s decisions created numerous stoppages which disrupted our rhythm. They had a big pack and wasted time at every opportunity, we needed to move the ball around as was clear we were dangerous with our better pace. Overall we had a good game plan, were totally dominate and ran out deserved winners. It would be a fitting end to continue our winning run and beat Launceston in our final game who are in a promotion place”