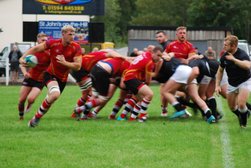 A good crowd turned out at Regentsholme on a glorious Thursday evening for this friendly fixture. New Captain Dave Bennet led a very youthful side with a few new faces in a match over four 20 minute periods so both sides could make use of a full squad. The game itself proved far from a friendly fixture with some big hits from both sides and also the usual handbags in a local derby. Overall the match was a tight affair with both sides cancelling each other out for long periods, with the Official not really getting to grips with the breakdowns it slowed the game down and frustrated both teams thus scoring was minimal.
The Severnsiders started the brighter and dominated the opening 10 minutes but kicking away possession when in the scoring zone cost them any chance of an early score. It was Matson who scored first from a breakaway in their own half saw them go the length of the pitch for Harry Atkinson to make it 0 – 5. Matson looked the sharper team and had plenty of pace out wide and it was not long before Brook Turner added another score which was converted for 0 – 12 the halftime score.
Lydney started the second period much brighter and a good scrum saw John Barker pick up and power over the line for 5 – 12. A couple of serious injuries saw Henry Sleeman and Harry Brown depart which appeared to disrupt the Severnsiders with a number of positional changes required. Following an aimless kick from the Severnsiders, Matson regathered the ball and a good move in the backs with a clever kick over saw no one at home for Lydney and Aron Mountfield scored to make it 5 – 17 with 20 minutes left. The crowd getting restless with the Officials game management got behind the team and the Severnsiders dominated the last period with Dave Bennet scoring a good try with Joe Hamlin adding the extras brought the score back to 12 – 17. Despite camping on the Matson line for the last 5 minutes the Severnsiders had a few drop passes and some poor execution meant they could not get across the whitewash and the game ended at 12 – 17. This was a very rusty performance from the home side, the lineout and set piece were especially poor so plenty of improvement for Coach Lee Fortey to work on before their next friendly at Regentsholme on Saturday August 31st against Dowlais.