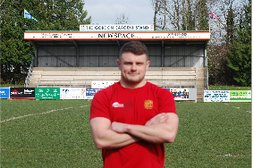 The Coaches and Fans are delighted to see Callum Wyman back in a Lydney shirt. Previously Callum has played many games for Lydney when we were in higher divisions and is a quality player, very popular and liked by all the supporters. Callum made his return against Devonport on Saturday coming off the bench he made an immediate impact in his customary wing forward position, carrying the ball well and putting in some big hits. With injuries to Kurt and Harry Brown his arrival is a real bonus to strengthen our back row where we are already having to play players out of position as cover. His fitness will give us a real presence around the field and ability to create turnovers will be a real positive. Expect to see Callum on the scoresheet very soon
Drive on Lyd