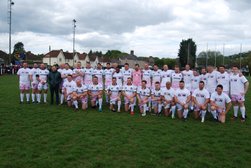 A huge crowd turned out on a chilly Bank Holiday Sunday at Regentsholme to witness a truly dramatic game ending in a draw with the Wayne Barnes Invitatonal XV retaining the trophy as being the current holders. The match organised by Wayne and Polly Barnes in aid of the charity ‘Breast Cancer Now’ which funds research to eradicate this terrible disease. International referee Wayne form Bream had assembled a star-studded line up and even had England Coach Eddie Jones on hand to help sort his team tactics. Wayne had ex Welsh International Nicky Robinson captaining the Invitational side, Nicky having 13 Welsh caps, with 125 games for Cardiff Blues and 58 for Gloucester would prove a real handful for the Forest side. Dave Emery who manages the Forest Select had again arranged a good balance of youth with some real old war horses assembled from all the Forest teams. James ‘Bash’ Bashford, Chris Holder, Chris Rawlins and Danny Trigg removed the cobwebs for the Foresters ably supported by the younger Jack Knox, Alex Nelmes and Jack O’Connell.

Ex Gloucester player and now referee Nick Wood got proceedings underway for a very frenetic first 10 minutes with both sides determined to run the ball on every occasion in a far from friendly encounter with some huge hits in the opening exchanges. It was the Foresters who opened the scoring when big Tom Emery crashed over, Jack O’Connell added the extras for 7 – 0. Jack O’Connell then followed up with two tries of his own, one being a good try after a clever kick through he regathered to score for 19 – 0. The Barnes team regrouped and after some good work from ex England and Bath forward Duncan Bell were awarded a penalty try by Wood to get back in the game. Now with the ascendancy the Barnes team scored two further tries’, one a class finish from ex Lydney player Charlie Vine, with Nicky Robinson knocking over the extras they had the lead for the first time at 19 – 21. The Foresters were then stunned into action and with the ball moved wide in a flowing move saw Tai Lakabuka run in unopposed to give the Foresters a half time lead of 24 – 21.

Replacement Tony Wicks got the second half underway as the Foresters looked to build on their lead, however a lost ball saw Matt Dickens run a good line to get Barnes the lead back at 24 – 26. With both sides making numerous changes it was the pace and power of Josh Hanam to score next to get the lead back again for the Foresters at 31 – 26. Barnes now emptied his bench and Nicky Robinson returning really started to run the show and a stunning 10 minutes saw the sheer pace from Anthony ‘woody’ Woodhall run in three tries to get the lead back at 31 – 45. Another try soon followed by Rob Hawkins to extend the lead to 31 – 50 and the match looked over. With Emery now switching his replacements upped the pace again and Nathan Tucker crossed for 36 – 50 to give the Foresters a glimmer of hope. With just a few minutes left the ever-green Chris Holder sped through a few missed tackles for 43 – 50. With just one minute left the Barnes team turned over the ball in mid-field and Josh Hanam collected the lose ball and scored a try which under massive pressure he converted to end an incredible game at 50 – 50.
Barnes was delighted with his team’s performance ‘adding we had to dig deep today as the lead was constantly changing so a draw was probably a fair result. A big thank you to all the players, Eddie Jones and also all the crowd in helping make this once again a brilliant day for the Charity’. Dave Emery was once again on the losing side but said ‘disappointed but we will be back next year to try and claim the cup for the Forest in what was a really entertaining game’.
Live bands were then set to entertain the huge crowd to end a really good ‘family fun day’ in the Forest.