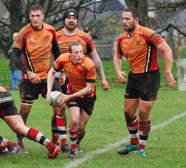 Lydney made the long trip to Plymouth to play Devonport Services who were riding high in the table. Without a win on the road for over two seasons the Severnsiders looked to be again in for a tough afternoon. However, spurred on by some recent good performances and a large contingent of supporters the improving Lydney IV dominated the Home side in what were very wet and tricky conditions.
The home side started the brighter and dominated the first 10 minutes but Lydney held firm and soon a good break in the back line saw Joe McClean score a try near the corner however the conversion unfortunately hitting the post. Devonport were straight back on the attack and immediately hit back with a converted try to make it 7– 5. A Lydney mistake and knock on lead to a penalty which was kicked to extend the home side lead to 10 – 5. However, this was not an afternoon the Severnsiders would roll over and with Dave Bennet dominating the line outs, John Barker making some rampaging runs from the base of the scrum, the complete forward pack was in total command. Virtually on half time a great break involving forwards and backs saw Lydney deep in the 22 and a good disguised reverse pass saw Dave Bennet crash over the whitewash. Nathen Tucker converted to make it 10 – 12 at the break.
The Severnsiders now dominate really took the game to the home side in the second half playing some good controlled rugby. With the home side under pressure at the set pieces they started to concede more penalties, with another mistake in midfield Nathan Tucker kicked a long-range penalty to make it 10 – 15. Lydney were soon back on the attack and a flowing move started by a good forward drive saw the ball spun through the backs and Tai Lakabuka running a great line, beating two defenders to score a in the corner. A few injuries in the second half resulted in Lydney having to empty their substitutes bench but gave the opportunity for Jack Knox son of the Lydney legend, Adrian Knox to make his first team debut. With the score now 10 – 20 Lydney looked to manage the game out, a few more scoring opportunities were created but knock ons and a forward pass resulted in the Severnsiders spurning a couple of further easy opportunities. With minutes remaining and deep in their own 22, from a scrum Devonport broke away and a good move saw then score a converted try. However, Lydney did not panic and some good ball retention by the forwards saw then close the game out for the final couple of minutes giving a final score of 17 – 20 and that elusive away win secured.
Rugby Director Dave Emery added “A great result and a well-deserved away win, not many teams come here and get anything. We defended well in the first half and not conceding many points which was a real positive. We played our best rugby of the season in the second half, we created loads of chances and got the crucial score. I felt all 18 played well today and we were in the ascendance for most of the game and always in control. We have a strong squad now which will only continue to improve as the season progresses”
Report by Roger Pike
Share via
FacebookTwitter
https://www.pitchero.com/clubs
Recent news