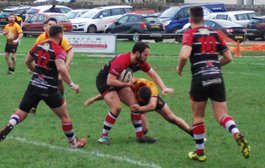 This was Lydney’s first league visit to Keynsham’s Crown Field and, despite the difficult conditions, was a game they should have won. With a strong wind and gushing rain for most of the first period, Lydney were pushed back by a strong - experienced Keynsham front five. Keynsham’s first try came 15 minutes into the game after Lydney conceded a knock on resulting in 10 metres from the Lydney line. It was at this point that the home team opened the scoring with Harvey crossing their opponent’s line and Bradnock adding the conversion. The Severnsiders were quick to respond to this early setback and were awarded a penalty. From a strong kick, this pushed the visitors 30 metres into Keynsham’s half. After good running by three Lydney players, Mike Massey crossed over the line to make the score. The Lydney lads launched a series of attacks but without scoring. To add to their frustration, poor handling and poor decision making in crucial scoring situations appeared to be the pattern of the visitors’ play. These unforced errors flattered Keynsham as they were greatly relieved when Lydney were about to score but wasted opportunities. The visitors’ frustration was eased somewhat when winger Nathan Tucker stepped up to score a penalty after the home team were adjudged to have held on in a ruck. Keynsham replied almost immediately with their forwards realising they were able to push their lighter opponents some 30 metres to the try line. Despite some stout defensive work by the Seversiders, the visitors’ resistance gave way as Keynsham scored their second converted try to make the score Keynsham 14 – Lydney 8. Within minutes Lydney had conceded their second try, Keynsham threw everything forward with their front five pushing the Lydney eight backwards yet again to their visitors’ line. Unsurprisingly, the heavy home pack managed to force their way over the line for Keynsham's third touchdown resulting from a rolling maul. Half Time Score: Keynsham 19 – Lydney 8
From the outset of the second period, Keynsham immediately pressed Lydney hard, sending them on the back foot 20 metres from their own try line. Before the scrum settled, Lydney made two changes through injuries with replacements Bill Nsofar and Josh Hannam joining the field. Lydney won the scrum in a very dangerous position and spread the ball wide with some excellent handling before captain Sam Arnott pounced on an opportunity for Lydney to score. Nathan Tucker stepped up to slot the ball between the Keynsham uprights making it Keynsham 19 – Lydney 15.
With the score line now so very close, Keynsham’s play deteriorated and the Seversiders sensed they could so easily win this game. A defensive error, deep in the right-hand corner, enabled Keynsham’s right-wing Pearce to gather the ball unopposed as it bounced perfectly for Keynsham to score their final try making the score line 24 – 14. As the Lydney faithful supporters had almost accepted defeat with only 4 minutes of play remaining before the final whistle, a superb last-ditch effort by forwards and threes enabled the Lydney backs to move the ball quickly for the hard-running winger Henry Sleeman to crash over for a very late try converted by Nathan Tucker. At the final whistle, Keynsham were relieved and a frustrated Lydney looked bemused thinking this was a game they should have one and only had one bonus point.
Coach Dave Emery said “very disappointing we should have won the game; our tactics were poor and we did not adapt to the game or the conditions. They had a big slow pack and wasted time at every opportunity, we needed to move the ball around as was clear we had far better in pace. When we had the ball, we kept running lines back into their big forwards making tackles easy rather than sinning it and moving it around. It was only in the last 10 minutes we adopted a proper game plan and were totally dominate, another few minutes would have given us a win.”
Share via
FacebookTwitter
https://www.pitchero.com/clubs
Recent news