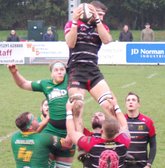 Lydney rampant over the Green Army

A huge crowd turned out for this local derby at Regentsholme with Lydney looking to avenge an embarrassing defeat at Newent earlier in the season. The match was far from a friendly encounter with some huge hits in the opening exchanges. The Severnsiders dominated the first 10 minutes with some strong forward play and were only meters from the Newent line when a dropped ball enabled Newent to launch a quick attack going the length of the pitch for winger Tommy Devries to score a try for 0 – 5. The visitors looked to disrupt the Lydney style and often used foul play to try and break up the game as the Severnsiders were started to get the ascendance. John Barker was very unlucky to receive a yellow card when clearly the visitors had started a mass brawl. However, the Severnsiders were not going to take a backward step today and manged out the sin bin period without issue. The Lydney midfield was dominating all afternoon with Joe McClean and Joe Hamlin putting is some huge tackles thwarting all Newent attacks. After 30 minutes, more foul play saw a Newent player in the sin bin and the Severnsiders took full advantage. With a penalty 5m out Lydney opted for a scrum and from a couple of further drives outside half Sam Arnott crashed over, Nathan Tucker converted to make it 7 - 5. The final 10 minutes before halftime passed quickly with both sides playing good running rugby at every occasion but another yellow card saw Lydney’s Joe McClean unluckily sent to the bin. Although a man down the Severnsiders remained in control to lead 7 – 5 at half time.
Playing down the slope Lydney again dominated the first quarter of the second half putting the Newent scrum under massive pressure. From another penalty Nathan Tucker extended the lead to 10 – 5. With Dave Bennet and Mike Massey dominating the line outs and Kurt and Harry Brown always first to the breakdowns, Lydney were getting plenty of possession, the visitors then started to lose all discipline and saw another player in the bin. From a series of penalties another Lydney scrum drove to the line and John Barker scored for 15 – 5. At the hour mark Lydney were now in command and more ill-discipline from the visitors saw them marched back 30 meters by the referee and lucky not to lose more players to the bin. With the Severnsiders trying to close out the game some good field position saw a try go begging from a knock on. Yet another yellow card for Newent saw Lydney finally take full advantage and from a 5m line out the resulting catch and drive saw Nathan Ford cross the whitewash to make it 20 – 5, which was to be the final score.
Coach Dave Emery was very pleased with the Severnsiders performance, ‘we had to tough up today, Newent are on a good run and third in the table so we knew it was going to be a battle. I was very impressed with our discipline as we could easily have got drawn into foul play and lose the focus of our game plan. We played some good rugby, dominated the game but I thought we left 20 points out there, anyway we will take a lot of confidence from this into the second half of the season’
Report and pictures by Roger Pike