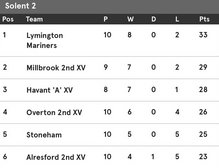 Rain forced the match to be moved, but all was not lost as the Mariners powered through to victory!

After torrential rain mid-week had left even the hi-tech new drainage system at Woodside Park struggling to cope, Lymington Mariners bravely relinquished home advantage and travelled away to Millbrook on Saturday 16th December, for a top of the Solent league clash.

With a strong squad and plenty of options for captain Matt Toms to choose from, his day was made considerably easier when fly half (and as it turned out the only kicker in the squad) Ben Rodway attempted to sidestep thin air during the warm up and went down like the proverbial sack of potatoes. With Ben’s day done before it even started, the Mariners turned to young Harry Lewis making his debut, to pick up the 10 shirt and run the backline.

Right from the kick off the physicality and intent of both teams was clear to see, with the Mariners scrum dominating the opening engagements and tighthead prop Stuart Harvey destroying his opposite number. Sadly the lack of a regular hooker, or anybody else who could throw straight, meant that the same could not be said for the line out! No matter, with few kicking options available either, the Mariners opted for a high tempo game keeping the ball alive and recycling possession time and time again, much to the delight of the travelling supporters.

With the breakdown being fiercely contested and the Mariners camped on their own line for long periods, eventually Nick Bubb managed to breach the organised Millbrook defence and powered his way up field well supported by Phil Jenner and a marauding set of forwards. With fresh enthusiasm the Mariners drove their way up towards the Millbrook line, eventually winning a quick penalty which Toms wasted little time in tapping to himself and smashing over the line.

With Lee Wilkinson at scrum-half now delivering excellent ball to the impressive Harry Lewis at fly-half, the Mariners backline was slowly beginning to tick and with big men Steve O’Callaghan and Stuart Brotherton in the centres, both possessing surprising pace and sleight of hand, wingers Mikey Jenner and James Bell both saw more ball than the rest of the season combined!

Despite excellent play from the Mariners the Millbrook defence refused to buckle till Jamie Banasik finally got hold of the ball in some space. With Jamie always keen to avoid passing and contact at all costs, he opted to run a great loop play with the backline, whilst never relinquishing the ball. He finally trundled into the corner to ensure that the Mariners went 10 – 0 up with no chance of a conversion!

As half time neared, both teams visibly faded as the fast tempo enabled by excellent referring, started to take its toll. With Millbrook ‘ringering’ the changes at half time, the second half saw the Mariners ship start to creak. It took some excellent work from the powerhouses in the second row Sam Wilcox and Oli Westall to keep the team on course, with Chris Baker and Chris Kennedy joining the fray, to bring a bit of ‘experience’ to proceedings.

With Millbrook scoring one excellent try that even the magnificent Zane Gills at 15 couldn’t keep out, the Mariners kept their heads and dug in. The forwards slowly trundling up field and Bell, capitalising on some excellent play from Lewis, O’Callaghan and Brotherton, flew down the left wing only to be bundled into the corner flag, with some excellent last ditch defence from Millbrook.

Keeping the pressure up and surviving a few heart stopping moments, the Mariners eventually won a penalty in the Millbrook half and with loosehead prop Toms having put in a herculean effort around the park all afternoon, he thought better of one last ‘tap & go’ and booted it into the corner. The resulting lineout loss and scrum to Millbrook spelled danger but one last huge effort by the pack won the ball against the head and the Mariners scrum powered in from over 10 metres out, with Jack Dovey finally getting his hands back on the ball to touch down and secure the win 15 – 7.

Despite many strong individual performances this was clearly a team effort with 18 shattered Mariners licking their wounds after the game. Amongst the heroes of the day though, one stood out with debutant Harry Lewis setting the bar high, winning the man of the match award. The Lymington Mariners go into the Christmas break joint top of their Solent league with high hopes for the second part of the season.