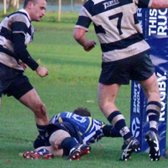 How to give away 23 penalties and still win ...

Mariners started slowly against Havant Saturday with some cold-fingered passing and a misfiring lineout preventing any coherent attack in the opening minutes, which kept the game firmly in the home side’s half. Sensing the early opportunity, Havant poached Lymington’s lineout ball and broke up the blind side from the ensuing mall to open their account.

However, the Mariners soon answered with a break by Tom Jenvey supported by Tom Crisell, which brought them to a scrum ten yards from the opposition try line. Freddie Lauder smashed the opposition’s line, but Havant’s cover defence remain strong and they were not above some testing breaks, which were foiled by solid tackling from Ben Rodway at number 10 and some try saving defensive work from Mr Pink and Mr Green.

If Havant were getting most of the possession, three things were working in Mariners’ favour – a dominant scrum in the set piece, a double-barreled kicking game from Jenvey and Rodway and pace in the backline, all of which aided smooth exits from their 22, despite facing a strong wind. But it was the pace that soon told. A kick from Rodway was chased down by Alex Clegg and Jenvey, the bounce proved kind and Mariners took the lead when Jenvey converted.

Mariners were building momentum, Ollie Pilling proving ruthless in the breakdown and Mitch Sullivan storming off the back of the pack. Another kick from Jenvey and break from Crisell took Mariners back up the park where Steve O'Callaghan stole the ball off the back of a Havant line out and made 25 yards through the defence to score. This too was converted, leaving Mariners 14:5 up. Lymington’ maul was also firing on all cylinders, forcing a penalty in range of Jenvey’s boot to provide another 3 points.

The second half started with Mariners giving away penalties, which Havant took quickly forcing some big hits from Stuart Harvey and Adam Harris to slow them down. But with that much possession gifted the visitors, they made steady progress up the pitch, Sullivan at one point holding the opposition no.9 up on the try line.

Jenvey and then Rodway regained territory with the boot, providing Clegg with a near chance on the chase, if he hadn’t missed his footing in the mud. The next chance from a Havant clearance fell to Crisell who sliced through the opposition, took a hit three yards out, but used his momentum to carry the ball over the line.

Further infractions from the home side resulted in a series of penalties that Havant took quickly each time, gaining territory and then kicking through. A scrambled defence saw the ball from one effort fall to the attackers, who managed to take it over the line amid accusations that the elderly linesman had not seen the ball go into touch, which he hadn’t, because it didn’t.

The ref’s patience was wearing thin and the Mariners were given a warning. The number of penalties conceded also meant little possession and a lot of defensive work.

But when they had the ball, Mariners were by far the more dangerous, and it was a bruising battering ram run from Harris that provided them with another 5 points. With more penalties conceded, Mike Austin finally took the rap and 10 minutes in the sin bin, the game ending 29:10 in Mariners’ favour.

Rodway was awarded Rivaaz Man of the Match, his lack of rugby socks in no way impeding an impressive performance in both defence and attack.