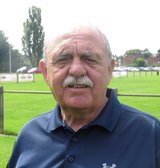 JANUARY 2022: In the first of many Q&A features with club officials, we caught up with Maghull Chairman Ron Young.

Q: The club recently celebrated its centenary 100 years. How long have you been involved with Maghull FC?
I’ve been involved with the club for over 46 years in different roles. It has been great to see the club grow both on and off the pitch during that time. I’ve met plenty of good people through Football, it has been a big part of my life.

Q: Can you give a summary of both your own playing and non-playing career?
Dundee United Youth, Dundee North End, Errol (Latter 2 teams at level equivalent to England’s National League).

Q: What does the role of Chairman involve on a weekly basis?
I am passionate that we ensure that the standards set by my predecessors are maintained. To be a focal point in decision making and to assist everyone connected with the Club. Be it Committee Members, Managers, Coaches, Players, Supporters, Junior teams as well as dealing with legal matters.

Q: What do you enjoy most about being involved in Football, and in particular Maghull FC?
Although you cannot match the feeling of playing the Sport, Coaching and Managing also has its rewards. Football is controversial and invites debate and differences. However, Football is the glue for cementing relationships and communities. I have made many friends through Football and I am sure, some have views different to mine – but that’s what makes it fun and special for everyone involved.

Q: What would success look like for the club?
League or Cup Winners would be rewarding for all the hard work carried out by everyone connected with the Club. The Youth set up for boys and girls is thriving with over 20 teams and growing each year, so bringing through players for the future would be fantastic. Camaraderie and friendship within the Club is also equally important.

Q: How did the club manage financially during covid and the temporary pause in games?
From my point of view the main challenge was ensuring everyone adhered to the rules that were laid down. This created problems but we had to adapt to changes in restrictions during different times.
Financially we did receive some support via grants but the main income was received in bar takings which allowed us to cover our outgoings. You’re always certain of a warm welcome in the Clubhouse and I encourage everyone to pop in for a drink.

Q: How important is it to the club to connect and support the local community?
It is vitally important for the Club to engage with the Maghull Community. This is a big catchment area and this Club is here for the youth and future generations. We should be looking to involve local business and residents wherever possible.
Our Clubhouse is available for hire and is there to be used where possible by the whole Community.

Q: What surprises you most in the modern game now compared to that when you were playing?
The game is no longer a contact sport like years gone by, which is probably a good thing after what when on in the past. However, it is annoying to see six foot athletes falling down from next to no contact so they gain free kicks. There is also the boredom of the team overpassing especially in their own half and going nowhere.

Q: What advice would you give to those playing or coaching in Football?
Never stop working hard, listening and learning. Each day is a School day, you learn something new that you didn’t know yesterday.

Q: And finally, how would you summarise the position of the club overall moving forward?
After a number of years where the Club were doing okay, I felt there was a need for a shake-up. This resulted in a Management Group being formed to replace the existing Committee Members and for this new group to take the lead in deciding the future direction and strategy. As can be seen by the recent refurbishment of the Clubhouse things are moving forward. The next step is the ground itself and although finalisation of this is not imminent I can assure you things are moving positively in the right direction.

With regards to the football, the First Team, after a poor start have settled into a good period and I can see this continuing through the season.

The Second Team have had a difficult time this season and lie close to the bottom of their League. I am optimistic that they can get the results to turn the season around.

Our Youth Team have also had a difficult season but credit to them and I can see them picking up a few results before the season is over.

What can we say about the Vets other than they are a grand bunch of lads. How do they manage to convince their partners that everybody plays football until their 50’s. What these lads have to do to get out for a pint!

When I am at Hightown or Buckley Hill on a Saturday morning it is a pleasure to see a number of our Junior Teams running about wearing the Blue/White Hoops of Maghull FC. Credit goes to the team managers, helpers and parents for the work they do so that the kids get enjoyment from running around kicking a ball.