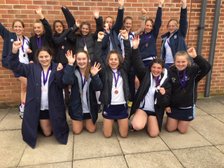 In the semi-finals against Wimbledon despite us dominating early possession, the girls found themselves three nil down due to some clinical goal scoring from Wimbledon. As the girls always do, they stuck to the task and displayed excellent resilience, drawing the second half to end up 5-2 at full time.

In the play off for third place, we played Epsom in an even game, the score was 2-1 to Epsom at half time. Maidenhead then dominated possession and forcing multiple short none of which we could convert. Momentum flowed back to Epsom who went on to secure the win.

Head coach Adrian Evans was very pleased with the top four finals place and the girls’ overall display. He said: “I am very proud of the girls. The team spirit and culture within the group is outstanding – they play for each other. They have scored 109 goals this season and conceded just 29. They played some excellent hockey and thoroughly enjoyed themselves.

We are very much looking forward to playing in the Cup area finals which we are hosting at Altwood on 12th May.