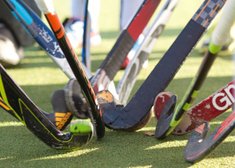 some great games of hockey

A bright but chilly day greeted the boys at the Epsom 7’s Tournament. With a large squad Maidenhead were lucky enough to be able to field two teams! Team A and Team B.

Team B started first against Epsom, the B’s started slowly which saw Epsom capitalise with 2 goals. After some adjustments in defence The B’s got back into the game with some good attacking play coming from Alex and Lewis! Unfortunately they couldn’t find the back of the net! Another 2 goals for Epsom and the game finished 4:0.

Team A we’re up next against Slough. The A’s started very strong especially on attack, which lead to 2 goals from Joseph. Slough pushed for a goal but a strong defensive partnership from Max and Sam, kept them at bay. The A’s used the wide channels effectively and 2 goals followed from Liam and Ralph. Slough responded with an own goal. Final score 4:1.

Team B were up again against Slough. A brighter start and some good defensive work from Victor and Francis held the Slough attack. The B’s pressed for a goal with Josh working hard on the right, unfortunately the goal post got in the way of the opening goal from The B’s. Slough attacked and scored 2 goals in quick succession. Again the B’s pushed for a goal with some good play from Lewis, with Monty hitting some fine shots but Sloughs keeper saved well. Unfortunately Slough struck twice again, final score 4:0.

The final game saw Team A play Epsom. The A’s were on form again and gave Epsom no time to settle on the ball. Good mid field passing from Matthew, Joseph and Liam led to plenty of shots on goal from Ollie and Jack. But against the run of play Epsom scored the opening goal. The A’s responded well and the constant attacks led to a fine finish from Jack. the A’s went in search for the winning goal, which came again from Jack, after some fine work from Joseph and Liam. Final score 2:1.

Well done to all the boys particularly the two keepers, Luke and Tyler, both made plenty of saves and commanded their D with authority.

Man of the match awards go to Victor and Joseph.