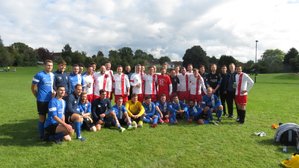 Gandhi once said that doing something for the fifth year in succession will bring more charitable donations than ever before. Fact.

Yup, we've surpassed ourselves. We are hosting the best day in the MTFC calendar at the National Sports Centre, Bisham Abbey. The boys 'can play' on the best surface in the South of England. It's an exact replica of Wembley don't you know!

Last year we raised £3650 after YOUR hard work. A huge thank you to all involved. But now we go again!

MTFC raise money for our amazing charities. This year, we'll continue our donations to MacMillan - the UK's leading organisation dedicated to supporting those affected by cancer - and our local, special cause, the Peter Miles Family Trust. This year, we'll also dedicate earnings to the Thames Valley Hospice, who do so much for the local families who look to provide loved ones support and care when it's most needed. Not heard of these people? Learn please. Quickly;

The plan is well rehearsed but please take a look at the idea below!

Wow. What a festival of football! Throw in a matchday programme and seeing which players ask for 'extra large shorts please', you'll have a ball watching!

We've mentioned charity. It's real. It's not just football, we're more than that...

Aged just 35, Peter Miles lost his battle with illness in December 2015. Peter was a close friend to many at the club, a founding player to the club and left behind a beautiful young family; wife Becky and Lucy (6) and Alex (4). A big part of our raising will go towards a trust fund for his children to attend university later in life.

Jan Dunne was the mother of another close friend and former player Craig Dunne and our annual Charity event was initiated to raise funds for her sons’ charity challenge, the DC60 Challenge, www.dunnechallenge60.com. Half our fund raising will go towards MacMillan.

Many of you will already know about this place, but the Thames Valley Hospice has provided care to those most important to us, including the Miles' Family. All their services are free, thanks to the generous support of fundraisers and donors who help to raise 70% of the £8 million they need to run the Hospice each year. Please check out their website and get to know...

We're looking for raffle prizes and gifts, so please get in touch with the club if you would like to support. We need your help, no offer is too big or small. Thank you in advance.

We've spent 14 years playing football. As each year passes, and our families grow, this day becomes more important...not just seeing old friends and bringing families together, but remembering those we've lost and those we care about. Every year, MTFC Legends becomes more important to the founders of the club and every member we've had.

So, to the football, Match Previews

This year sees the two players that have played more First Team games than ANYONE else take charge of our Legends!

John "I'll play when I'm ready" McKrell and Phil "Yooo lay-zay" Lowe boast 512 First team starts between them. The 'big names' always show; David Jenkins, Craig Dunne, Ben Trillow, Neil Barker, James Wickens, Duncan Webber, John Jenkins (all the core of the 2004/05 debutant side) are all involved. Even Gavin 'First Goal Shank' Croxford is stretching his hammys ready to play 15 minutes. Add past Player of Seasons such as Chris Garraway, James Larkin, Marc Boyle and Neil Smith plus the wiley (and quick) Russell Challis, Joe McKrell and Chris Connell, there is a raft of talent available to the MTFC Legends Gaffers.

Oh, did we mention the Air Miles of Mark Maclean (Thailand) and Gary Saunders (Canada) are heading home...???

We've got a new-look first team this season, under the stewardship of new Gaffer Andy Rumble, so expect to see plenty of new faces, even better than last term! We won't preview this as the current side are desperate to take a series lead...

Tom Minter has a promotion winning Reserve team, led by Clarkey, Matty Crox and Player of the Season Scott Cooper, and wants to make his mark over Beck's A force. One win away from the TVPL D3 title last season, Minter's Mob will be rusty (is cricket a worthy reason to miss preseason?) but keen to better the 7-4 basketball game from last season.

WWWOOOOOOAHHHHHHH- THE A's ARE ON FIIIIIIII-YAAAARRRRR
(Kings of Leon, sing it in your head)

Beck's Boys done good last term, promotion in their debut term. With some young ballers in the squad, the 4-7 from last year is a distant memory (there's no way Akers will bag 2) and they're keen to beat the Ressies!

So there we are. MTFC Legends Day. We want your help. We need your time. We'd love you to join us.