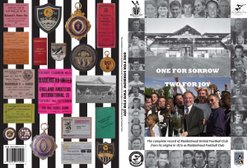 - From the Club Shop at 1st Team home games (opens around 2.30pm (Saturday matches) and 7.15pm (Midweek matches) and again at the half-time interval).

If you have any queries, please email Mark Smith

The book includes the following articles:

The book is illustrated with hundreds of images.