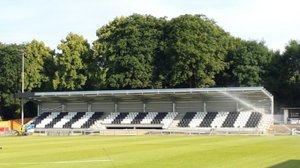 Following the regrettable ‘Great Fire of York Road’ in 1986, our beloved old ground had to ‘Make do and Mend’ with a ‘temporary’ seated structure on the Railway side of the ground…..a structure which stood for nearly 20 years.

The eventual replacement was a 542 seat stand which won the illustrious Groundtastic ‘Best New Non League Stand’ award for 2014/15 along with a glowing report from the influential magazine, who wrote:

“Sheltering beneath the trees on the railway side of the ground, what immediately strikes one about the new stand is how easily it blends in with its surroundings. Any jarring notes that might have been struck by its modernity are soothed away by its unobtrusive black and white colour scheme. Indeed, Maidenhead's new stand is a positive enhancement to a grand old ground, which while bring York Road bang up to date, avoids impinging on its aura of history.”