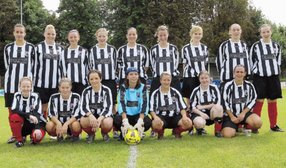 Women’s football - outlawed by the FA until as recently as 1971 - continues to go from strength to strength. Maidenhead United Ladies was formed in the summer of 2008 and were promoted as champions of the Southern Regional Women’s Football League Division One at the end of their first season.

Since then the team – now known as Maidenhead United Women – have achieved a further promotion into the FA Women’s National League and this season will be their sixth straight campaign in the South West Division 1, the fourth tier of women’s football in England.

Competing against women’s teams affiliated to clubs such as Southampton, Swindon Town, Cheltenham Town and Exeter City, the side captained by Amy Saunders – who has been with the team since it started in 2008 – continue to hold their own and are proud to be the highest ranked team to be associated with Maidenhead United FC.