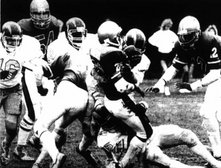 The York Road ground has a long history of hosting sports other than soccer and in the late 1980's American Football side the Thames Valley Chargers were tenants at our home.

The Chargers – of the Budweiser League Central Premier Division – first played at York Road in May 1986 and enjoyed a very successful inaugural season at York Road, winning their Conference which earned them the opportunity to compete in the National Championship for the 1987 season. The Football Club received a fixed percentage of the Chargers gates, which during a parlous period for Maidenhead United generally tended to eclipse their own football match day receipts.

That 1987 season started with a benefit match in aid of the Maidenhead United Fire Fund but was to be the last in which Gridiron would be played at the home of the Magpies as concerns were raised as to the state of the pitch.