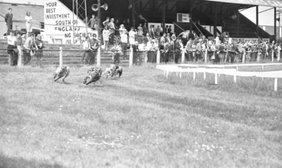 York Road has been a versatile venue over the years. In the 1970s a new venture came along, with the Maidenhead Advertiser of 15th May 1970 reporting that ‘Dog Racing Comes To York Road’.

Readers were advised that there were eight meetings planned for the football off-season. The venture was headed up by local owner and trainer Roy Furby with the first meeting held on 30th May 1970. The Advertiser reporter explained: “The track, which will be grass, will encircle the pitch but because of lack of space will have to encroach on some parts of the field.” Admission was priced at four shillings which included a race card – a useful fundraiser.

Into the 1990s, Whippet Racing had a brief resurgence. A meeting on Friday 8th March 1991 attracted “around 220” punters. The following day a mere 219 souls turned up again to watch promotion-chasing Magpies take on Ruislip Manor!