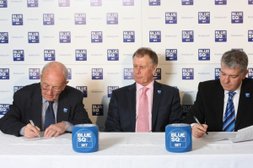 The Football Conference are pleased to announce that Blue Square, part of the Rank Group, has signed a new three year - seven figure deal, to continue as Title Sponsor for all three divisions for the next three seasons.

The agreement, signed by Mark Jones the MD of Blue Square and Brian Lee, the Chairman of the Football Conference took place in the presence of Sir Geoff Hurst, who will be Blue Square’s guest of honour at this season’s Promotion Final at Wembley on Sunday 16th May. Blue Square are excited to have such a legend, not only in this World Cup year but with him returning to the ‘Venue of Dreams’ to present the trophy to the club who will gain promotion to the Football League via the Conference play-off system.

Mark Jones stated “We are delighted to be continuing our sponsorship of the Conference competition. Football is a vital part of our company strategy and we are delighted to support that with our investment into the grassroots game.”

Brian Lee in response commented “The partnership with Blue Square has seen The Football Conference grow in stature in the last three years within the professional game. As the present season draws to an end we are absolutely delighted that we are renewing our sponsorship with Blue Square and look forward to continuing our successful working relationship with them in the future'.

Member clubs will starting next season, see a closer link with other partners of Blue Square via the Rank Group, namely Mecca Bingo and Grosvenor Casinos. Spearheading the sponsorship on a day to day basis will be Richard Jaques, Sponsorship Manager for Blue Square. In his new role he said “It’s fantastic to be able to continue our association with the league. The new deal runs for another three years and we look forward to supporting all of the member clubs during that time.”

As this current season and the current deal draws to a close, Alan Alger, PR Manager for Blue Square underlined his and Blue Square’s passion for the competition “This season is shaping up to be as exciting as the first two. I’m extremely happy that the deal will run for three more years as attendances continue to rise and the quality on the field reaches even higher standards. The Blue Square Promotion Final in May will be eagerly awaited by all in football generally, let alone the fans of the two clubs who will be treading the hallowed turf to secure their dream end to this fabulous season”.

Pictured at the signing of the sponsorship agreement are from left to right: Brian Lee, Sir Geoff Hurst and Mark Jones