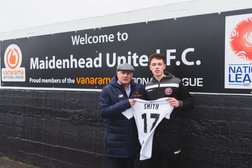 Maidenhead United are delighted to announce that teenager Reece Smith has signed a contract with the club.

The 18 year-old winger is a product of the MUFC Academy, having represented the Under 16s before featuring in the club-record-breaking runs to the Third Round of the FA Youth Cup in 2018/19 and 2019/20.

Smith made a MUFC First Team debut against Binfield in the Berks & Bucks Senior Cup last December and was handed a first start in the following round against Marlow. Reece has since been named in the XVI selected by Alan Devonshire at Sutton United on the first day of this current National League season.