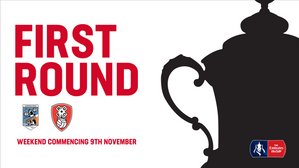 We will welcome Rotherham United - an EFL Championship side last season - and the match will be segregated with visiting supporters accommodated in the Bell Street / Railway Side corner of the ground with a portion of seats available. Millers supporters will enter the ground via Bell Street turnstiles only, with home supporters admitted via the York Road entrance.

Magpies and Millers supporters wishing to attend and who do not already have a ticket can purchase on the turnstiles on match day.

For Maidenhead supporters, the York Road turnstiles will be open from 11:30am to ticket holders and those wishing to purchasing a ticket on the day. Don't forget that BBC Football Focus are Broadcasting LIVE from York Road tomorrow from 12:05pm and Stripes will be open to all Maidenhead supporters who wish to participate as part of a live 'studio' audience! The Tea Bar will also be open. Please note - there will be strictly no re-entry into the ground.

For those who would like to beat the queues at the turnstiles, e-tickets will be available for purchase online until 11am on Saturday 9th.

A reminder that for this match Season Tickets and Junior Magpies cards will not be valid for entry.