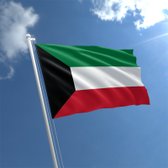 Maidenhead United are delighted to announce a prestigious pre-season friendly fixture with the Kuwaiti national team to be played at York Road on Tuesday 16th July 2019 with a 7:30pm kick off.

Ahead of the second phase of the Asian Football Confederation section of qualifying for the 2022 World Cup starting in September, the side ranked number 156 in the FIFA World Rankings will embark on a training camp in England next month. The Kuwaitis are managed by Croatian Romeo Jozak who previously coached Dinamo Zagreb and the Libyan national team before a short spell in charge at Legia Warsaw in Poland. Asian Cup Champions back in 1980, the side known as Al-Azraq (The Blue Wave) could face one the likes of Japan, South Korea or Australia in qualifying as they look to secure only their second ever appearance at the World Cup Finals since their debut in 1982 when they were drawn in England’s group.

The fixture will be a very useful exercise for Alan Devonshire and his team as they warm up for another challenging Vanarama National League season. The Club had hoped to arrange a pre-season fixture with our friends at Plymouth Parkway in memory of our late Club President Jim Parsons however neither club has been able to fit the match into their busy schedules this summer. We will look to arrange a fixture with Parkway next pre-season.

Our full pre-season schedule is as follows: