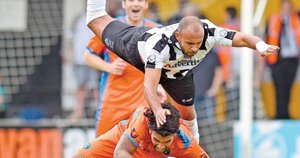 Due to international call ups, our Vanarama National League fixture with Havant & Waterlooville - which was due to be played on Saturday 23rd March - has been pushed back to Tuesday 26th March with a 7:45pm kick off. Any pre-purchased tickets for the original fixture or for hospitality will be valid at the rearranged fixture.

Maidenhead United would like to thank H&WFC and the National League for their understanding in agreeing this fixture move and we look forward to welcoming both sets of supporters to York Road on Tuesday 26th March.