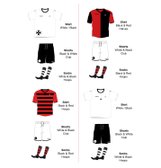 Heritage Kits | Have your say!

Fan consultation on kits for our 150th year

Maidenhead United will celebrate its 150th anniversary next season…..and we are looking for our supporters to help us in choosing commemorative kits fit for the occasion!

Following a supporters meeting after the Solihull Moors home fixture earlier this season we asked for fans feedback on how we should celebrate our sesquicentennial season. From that feedback and in consultation with our official kit supplier Uhlsport we are pleased to offer four designs which represent the themes that our supporters wanted to see reflected in our kits for this special campaign.

Options A and B are a modern twist on a colour scheme which has featured heavily in our history. Although many will recognise MUFC by black-and-white stripes, the Magpies predominantly wore from the 1930s through to the early 1990s a combination of plain white shirts and black shorts. The celebrated side which dominated the Corinthian League during the late 1950s and early 1960s and were Berks & Bucks Senior Cup winners five times in eleven seasons during this era, for instance, wore these colours.

The Maltese cross on both Option A and Option B are also a nod to our first ever matches in the 1870s. Whilst there is no photographic evidence of those early Maidenhead FC kits, contemporary newspaper reports describe “Maidenhead…..white with a black and green maltese cross”. Given that we cannot be sure where exactly on the shirt the cross was located and neither can we determine its size on the shirt, we present two options A and B which include the maltese cross in differing locations and sizes.

Options C and D are a tribute to our cup-fighting teams of the late 19th century. Option C is a replica of the strip which Maidenhead FC wore during our historic first ever FA Cup tie, one of the first four ties ever played in the famous competition. Option D honours the side which won the club’s first ever piece of major silverware, the Berks & Bucks Senior Cup on 1894/95.

We would like all supporters to have the opportunity to have their say in determining how our team will look when representing the long history of our club in our anniversary season. For more information on the historical significance of the designs, please see the attached document 'MUFC Kits 2020/21 - Our History our Heritage'.

To have your say please COMPLETE OUR ONLINE SURVEY.

Consultation will close by Saturday 28th March 2020 and results will be announced at our home fixture with Torquay United that afternoon.