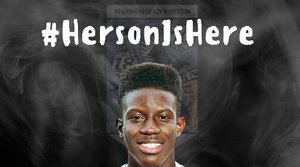 Winger Herson Alves signed up for the Magpies last week and the Portuguese youngster is itching to get going at York Road.

Herson started his career as a youth at Benfica before joining EFL Championship outfit Brentford where he starred regularly for the Bees Under 23 side. Loan spells at Hampton and Sutton gave Alves a taste of first team football but it was his sparkling performances in development football which attracted the interest of the Maidenhead coaching staff, including former Bee Ryan Peters. And that interest had been established some time ago as Herson explains: “They were interested in signing me on loan last season but that didn’t happen. I think they kept an eye on me”.

And it is clear that Herson has ambitions to further his career in stepping up from development football when he explains his keenness to move to Maidenhead: “I’ve picked Maidenhead because I saw an opportunity to play senior football which is what I want to be playing”. Herson describes Under 23 football as a good experience and told us “It was good to play in the Under 23s because I learned a lot but now I need to take the next step which is men’s football”. That experience of playing against the top youth players of leading Premier League sides has provided Herson with some good memories, most recently a starring role against runaway Premier League Champions Manchester City: “My highlight was to be able to play at Griffin Park for the last time and to get a goal as well”.

Herson however is looking to make new memories and an immediate impression at York Road. He describes himself “as comfortable on the ball” and “a strong player and a goal scorer”. Herson states that his simple targets are “to get as many goals as I can and to help my team to promotion or the play-offs” and he hopes to excite the Maidenhead faithful in doing so.

It promises to be an exciting second National League season for Maidenhead with young and hungry talent such as Herson coming through and keen to make an impression. Why not join us for the 2018/19 campaign by signing up today for one of our great value season tickets? Book up today: https://maidenheadunitedfc.ktckts.com/brand/season