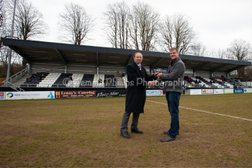 It's official. The new stand is Groundtastic.

The new stand received the official seal of approval from Groundtastic magazine before kick off on Saturday.

The magazine, which covers football stadiums all over the world, adjudged the new stand on the railway side to be the best new construction in non league football in the 2014/15 season.
Groundtastic kindly sponsored Saturday's match which ended in a narrow defeat to Gosport.
The visitors took the lead in the tenth minute through Lee Wort, after David Tarpey had missed a great chance to open the scoring at the other end.
United pressed hard for an equaliser but went further behind midway through the second half when a long shot from Luke Bennett took a heavy deflection to leave goalkeeper Ashley Timms powerless to stop the ball hitting the back of the net.
Tarpey did pull a goal back with three minutes remaining but it was too little too late for the Magpies who were grateful for two stoppage time goals by Bishop's Stortford to peg back Farnborough to maintain a six point between United and the relegation places.
After the game Groundtastic's Paul Claydon (pictured) nominated Danny Green as his man of the match.
Share via
FacebookTwitter
https://www.pitchero.com/clubs
Recent news