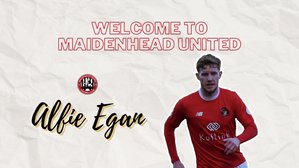 The Magpies are delighted to announce the loan signing of 23 year old midfielder Alfie Egan from Ebbsfleet United until the end of the season.

Alfie left EFL side AFC Wimbledon in the summer of 2019 to sign for the Fleet after a successful trial. Egan came through the Dons’ youth ranks, making his League debut in 2016. He appeared 28 times for the club and enjoyed spells at Sutton United, East Thurrock United and Kingstonian on loan.

The busy, industrious midfielder can also play as an emergency right-back and was one of a few players retained by the Fleet from their 2019/20 squad, signing a new deal in July 2020.

Chief Scout Lee Devonshire was thrilled with the latest piece of business as the Magpies prepare for a packed end to the season: "Alfie has real good pedigree and EFL experience with AFC Wimbledon. A high-energy midfield player with good ability on the ball who I believe will be a valuable asset during what is a very busy run-in".

We welcome Alfie to York Road and wish him a successful spell with us.