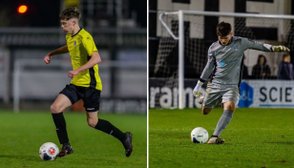 Magpies 150 Challenge | Reece vs Fred in a Penalty Challenge!

Academy products to go up against each other

Reece Smith and Fred Chapman have challenged each other to a 150 Penalty shoot-out in aid of the Magpies 150 Challenge!

Winger Reece is confident that he can score 75% of his penalties past his team mate and friend Fred, who made 3 first team appearances in goal for the Magpies last season. Reece also made a first team debut for Maidenhead United in the 2019/20 campaign, and these two exciting home-grown products from our successful Academy are an exciting part of part of our future.

You can sponsor Reece and Fred in their duel and of course we will bring you coverage of the challenge as the two teenagers put their pride on the line!

The link to sponsor the boys is below:

All funds raised will be spread equally amongst the 15 Local Charities being supported during the Football Club's 150th anniversary season.