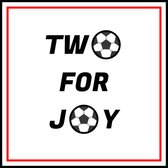 Two long-time Maidenhead United supporters have teamed up to record an unofficial charity single, commemorating the 150th anniversary of the first football match at the club's historic York Road ground.

'Two for Joy', by KSG & The Sunshine Man (aka Matthew Foster and Gordon Sweeney), will be digitally released on Tuesday 16th February - 150 years to the day since Maidenhead defeated Marlow - with proceeds donated to the Maidenhead United FC Community Trust (as part of the Magpies 150 Challenge initiative).

"I first wrote lyrics for a Maidenhead United song in 2012," said Matthew, "but there have been several rewrites since; to incorporate moments such as James Mulley's famous goal at Port Vale, and winning the Conference South title at Margate.

"I'm not musical at all - as those that listen to the song will probably work out for themselves! - and so I tried to persuade my brother-in-law in Bristol to record it, plus a local punk band, but nothing materialised. Then it dawned on me that Gordon - whom I'd been standing next to, on the terraces, for years - is an electronic music producer in his spare time and was previously the resident DJ at The Honeypot. At the beginning of last year, I asked for his help; my new goal was to release something to mark the 150th anniversary of the first game. He said to email my ideas across, so I recorded the lyrics and some humming, basically, using my iPhone.

"He subsequently described his initial workings on the track as sounding like Aphex Twin meets Radiohead! Intriguing, but not quite what I had in mind! After referring him to particular songs by The Fall, Goldie Lookin Chain and Beastie Boys, things started to come together. A lot of credit must go to Gordon, to be honest, for making some sense of it all!
"It certainly doesn't sound like your typical football song, but I don't think that's necessarily a bad thing. It might not be everyone's cup of tea, but it's for charity, at the end of the day, and so I'd urge all to buy a copy; Maidenhead supporters especially. I hope some will like it. At the very least, newer/ younger fans might be encouraged to look up some of the legends of yesteryear, mentioned in the lyrics.

"I think that York Road is a special place. My late Grandad - who was a Magpies fan for more than 60 years - first took me, when I was a toddler, in the mid-80s; while my Mum, who sadly passed away last October, was also a regular in times past. I, for one, will be heartbroken when - as seems inevitable - the ground is sold for development, so am really pleased that Gordon and I have been able to produce a lasting tribute."

'Two for Joy', by KSG & The Sunshine Man, will be available to download - as of Tuesday 16th February 2021 - from iTunes and other popular music platforms.