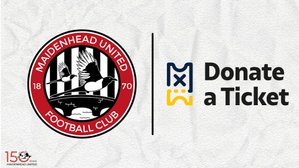 With football clubs losing a key source of revenue in ticket sales and gate receipts, you can donate your ticket!

We are encouraging Magpies fans to donate their ticket costs back to Maidenhead United. After numerous kind questions regarding how individuals can support the club financially and the purchasing of season tickets ahead of next season, we are delighted to be involved in the DonateATicket campaign.

DonateATicket offer football fans the facility to chose their donation amount and the club in which they would like to support.

100% of all money donated goes to the football club.

With leaderboards for each division, as well as an overall leaderboard, clubs can compete against each other to see who can sell the most tickets.

DonateATicket say: “Our clubs are often the lifeblood of a community and often rely on the support both financially and voluntary from fans. No matter who we support, our clubs will have given us some of the biggest highs we’ve known, and donating in this way will help YOUR club continue to provide these memories. Support your club when it’s most needed. #donateaticket now.”

You can find more information and place your donation to Maidenhead United by following https://donateaticket.com/donate/maidenhead-united/