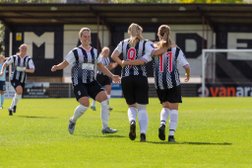 By York Road PA
15 May
Share via
FacebookTwitter
https://www.pitchero.com/clubs

After a win on the final day of the 2018/19 season had secured FAWNL Division 1 South West football for a fifth consecutive season, the management team of George Marsh and Liam Vaughan strengthened the squad for the new challenges ahead.

New blood was brought in with forward Steph Nelson, midfielder Vicky Carvill and defenders Sarah Thompson and Megan Halfacree joining the club. Elle Vietz also returned to MUFC whilst Wales Under 17 international Kate La Cumbre arrived on loan from Southern Premier Division side Oxford United. A further touch of international class was added with the signing of German midfielder Annika Striepecke who has graduated from the Juniorinnen Bundesliga in her two-time World Cup winning homeland. There was a new face in the coaching team as well as former Maidenhead United defender Nevin Saroya – who started his career at Brentford – arrived to help George and Liam.

It was perhaps understandable given the amount of new players bedding in that a slow start was recorded. The opening game at York Road saw a 4-0 reverse to Buckland Athletic, a result which was a little harsh on the Magpies on a day where very little went our way. Ellie Parker saw red for handling outside of her area and therefore missed the following game when – despite Simone O’Brien’s first of the season – the team crashed out of the FAWNL Cup with a 5-1 defeat to the 2018/19 Southern Premier Divison runners-up Cardiff City. More pain followed with a 6-0 reverse at the end of a trip to Larkhall the following Sunday.

The hard work on the training ground however was to pay off with successive sunny Sunday afternoon wins at York Road which equalled our tally of 2018/19 FAWNL victories by mid-September. Against fellow strugglers from 2018/19 Poole Town, the Magpies demonstrated their improved technique and confidence. A brace from flying winger Simone O’Brien – herself in fine early-season form – saw off the south coast side with relative comfort and a week later it was Steph Nelson at the double as Swindon Town were seen off in SL6 by the odd goal in three for another fully deserved three points. The Swindon win however was marred by a season-ending injury to long serving Tina Brett.

In between times there was a 4-0 midweek reverse at a strong Chesham United side who boasted a strong home record; a disappointment but still an improvement on the equivalent fixture the previous season. A trip down to Cheltenham was further evidence of the progress being made on and off the pitch. Against the promotion chasing Robins, United gave the hosts a right good game in a 3-2 thriller. Steph Nelson was again poaching goals and there was a first MUFC goal for Annika Striepecke, a memorable effort from the skilful German.

A solid start had been made with six points from six games, three-quarters of the previous season’s tally. Now it was time to focus on cup competitions as the weather cooled into autumn. Glory in the Women’s FA Cup, Berks & Bucks Cup and FAWNL Plate was up for grabs.