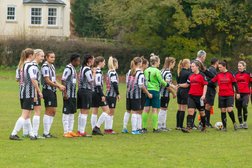 By York Road PA
16 May
Share via
FacebookTwitter
https://www.pitchero.com/clubs

If the League campaign is considered to be like a marathon then the Cup competitions could be compared to a series of sprints. And unfortunately in the Women’s FA Cup MUFC were second to the tape in the very first heat. The Magpies entered the competition at 3rd Qualifying Round stage and entertained Bowers and Pitsea at York Road on 6th October. The underdogs from the Eastern Region Women’s Football League Premier Division battled gamely at York Road and will feel that they deserved to pull of the shock win. Some errant finishing and bad fortune cost Maidenhead albeit there was a late rally following a goal by Captain Inspirational Alex Dover from a free-kick. An equaliser however was not forthcoming.

The team dusted themselves down after this huge disappointment and won through in their next outing a fortnight later, defeating Southern Region Women’s Football League Premier outfit Woodley United at Bulmershe Pavilion in the County Cup. Maidenhead seemed to be cruising after an early goal by Simone O’Brien and a penalty coolly despatched by Captain Dover, but the home side came roaring back in the second half. Former Woodley player Sarah Thompson had the satisfaction of scoring the clinching goal when her ball in from the right crashed into the net via the far post to seal a 3-1 win.

The Cup tie interlude continued with a mini run in the FAWNL Plate competition. At Cambridge United, Maidenhead edged through with a 1-0 win secured by an accurate free-kick from in-form O’Brien and in the next round looked well set to progress having opened up a 2 goal advantage against Stevenage thanks to another brace from Steph Nelson. The tie was to end in heartbreak though as the lead evaporated late on after goalkeeper Ellie Parker saw red for handling outside of her area for the second time this season.

In between times, the Berks & Bucks run continued with another win against a SRWFL Premier outfit, this time in a tie switched to Newbury’s home ground. United ultimately eased home against a hard-working and spirited side with O’Brien notching her sixth of the season after good work by Kate La Cumbre, before second half goals from Annika Striepecke and Steph Nelson sealed a semi-final place. What would ultimately prove to be the final game of 2019 as a wet winter took hold was played on 8th December ‘at home’ at Beaconsfield Town FC. With Parker suspended it was no surprise that the high-flying visitors Southampton Women took the three points in a 4-0 win, albeit the Magpies worked hard throughout against talented opposition. It would not be until after Christmas that Maidenhead would be in action again.