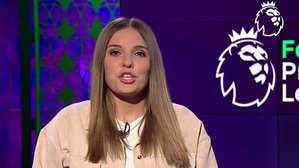 TV's Olivia reflects on her time as a Magpie

With the Premier League returning to our screens next week this is a busy time for 26 year old former Maidenhead United Women star Olivia Buzaglo.

Daughter of former Woking legend Tim – who so famously scored an FA Cup hattrick for the Cards at West Brom nearly 30 years ago – Olivia was herself a prolific goalscorer for the Magpies in her spells at York Road between 2012 and 2015. However, as a presenter for Premier League Productions Olivia had to put her career first in order to progress her career in what is often a male-dominated arena.

Conscientious Olivia has a job that the most fanatical football fan can only dream of and with the ‘big league’ back on Wednesday 17th, Buzaglo is busier than ever: “When I'm in the office I go in in the morning having written my script already. I'll go down to makeup, get my hair and makeup done - which is lovely! I then head into the studio, record my piece. Then I spend my day putting together a Fantasy Premier League show that goes out every Thursday and doing voiceovers for different programmes that we make. I still can't really believe it's my job!”

Her job it is, and a talented broadcaster she has become. So how did Olivia get into such a competitive industry? “It's quite a long story but here's the short version. I interviewed some sports broadcasters for my dissertation whilst at Uni and a guy I interviewed worked at IMG and told me to apply there. So I applied and got the job in the summer. That was four years ago now. But it wasn't straight away - I did technical jobs for three years and worked hard, showed them what I wanted to do and what I could do and then this season I went full time as a presenter, so they believed in me and knew I had potential and knew what I was talking about. Now I'm in dreamland.”

The day job takes up most of Olivia’s time now but she remembers her time as a prolific goal scorer at York Road – an incredible 45 goals in 39 games – fondly. “I ended up joining Maidenhead because I played a friendly against them when I was playing for my team and I knew a couple of their players. Actually I had no intention of joining them but I must've scored in that game and one of their girls asked me to play in a friendly for them. I did and my manager at the time wasn’t happy! So I left and went to join Maidenhead instead. I only really played locally when I was younger. I played for a team called Knaphill and absolutely loved it. Then I played for Maidenhead, played a few games here and there for QPR and then got asked to play for Watford. But I had to make a choice between working in football and playing it and I chose working.”

Television’s gain is a loss for women’s football. Olivia played a full part in the 2014/15 Southern Regional Women’s Football League title-winning campaign as the Magpies earned promotion to the FA Women’s National League, where they will ply their trade once again in 2020/21. “I had so much fun playing for Maidenhead. We won the league in one of the seasons I played there. One of my favourite personal memories was an FA Cup game. We won 5-1 I think and I scored four and set up the other one so that was a highlight. I think everyone will tell you I had one main strength as a player and that was my pace. I've always taken after my dad and been a very quick striker, a knock-the-ball-past-them-and-run sort of player. I could finish with both feet as well so I guess that was another strength of mine. On the other hand my weaknesses were that I was so lazy, would only run when I got the ball and I'd never head the ball! I think I've scored about 3 headers in my life! I don't think I ever had the mentality or ever believed I was as good as I was. I only really played for fun and had I taken it more seriously and trained better then maybe I probably could've played at a higher level.”

Olivia still keeps in touch with her ex team-mates – “I speak to them on Twitter and it's nice to keep in touch and see how Maidenhead are doing” – as she continues to live the dream in her day-job: “I presented pitch side at Tottenham vs Chelsea this season, speaking to two fans that had travelled from LA to watch the game, that was so special. I also presented my first live TV show for the Premier League which went out all over the world. A 1 hour live show, speaking to fans across the world about the weekend's football. It honestly doesn't get better than that.”

Would you like to represent Maidenhead United, as Olivia Buzaglo did with great distinction? Perhaps you know a talented female footballer looking to play in the FA Women’s National League? The club are looking to strengthen their squad for the 2020/21 season and are inviting expressions of interest to join us in pre-season for a trial. E-mail your playing CV to our Coach Nevin Saroya via nev@maidenheadunitedfc.org The team are also looking for sponsors – both for the team and for individual players next season – to help with the costs of playing in the fourth tier of women’s soccer. Again, contact us via nev@maidenheadunitedfc.org if you’d like to become involved in sponsoring us.