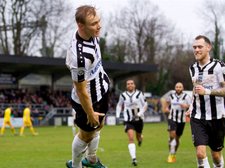 New Signing | Barratt is Back

Sam was a favourite in Maidenhead colours during his previous spell at York Road between 2014 and 2018. A prolific scorer signed from Hellenic League soccer with Bracknell Town, Barratt made 43 starts in the black and white and was named as an impact substitute a further 114 times. Barratt scored 17 goals across four seasons, the most memorable of which was a last gasp header for our first ever National League goal at Maidstone back in August 2017. The Berkshire-born youngster also earned England C caps during that inaugural National League in 2017/18.

Barratt earned a richly deserved move to EFL League One in the summer of 2018, joining Southend United but suffered the considerable blow of long term injury early in his time as a full time pro. Coming back into the Shrimpers team before the Lockdown was imposed and making an immediate impression, Barratt was released by the Essex club when the curtailed season ended with Southend relegated to League Two.

Good luck for the new season Sam, from everyone at the club.