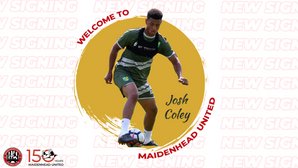 Coley began his career with Southern League side Hitchin Town and also spent time on loan with Baldock Town before impressing in a trial and signing a deal with Norwich City in July 2018. Josh featured regularly for the Canaries Under-23 side and in June 2019 joined Scottish Championship club Dunfermline Athletic on a loan deal, making his first appearance in a Scottish League Cup match with St Mirren where he played the full 90 minutes of his side's 3–2 victory. Coley’s Canaries contract was cancelled by mutual consent in February 2020, whereafter Coley enjoyed a short spell with Stotfold.

Chief Scout Lee Devonshire was delighted to secure the first signing of the summer, telling us: “Josh is a young lad who did very well at Baldock Town thus earning a big move to Norwich back in 2018. He is a winger who has played plenty of times in the 23’s but as many young lads find, breaking into a Premier league XI is very difficult. He had a loan move to Dunfermline in Scotland only last season. He is a young man who is hungry to kick on and Norwich spoke very highly of him when we spoke to them which is important to us, so we look forward to working with him this season.”

Welcome to York Road, Josh – we all wish you a successful spell with the Magpies.