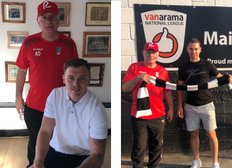 Maidenhead United are delighted to announce that a further three players have signed terms with the club ahead of the 2020/21 Vanarama National League season.

28 year old winger Dan Sparkes – who most recently played a regular part for Barnet as they reached the National League play-offs – reunites with Alan Devonshire having served under the Magpies gaffer at Braintree earlier in his career. Sparkes made close on 150 appearances for the Iron, scoring 19 times, and has also gained National League experience with spells at Torquay United and Dagenham & Redbridge prior to joining the Bees.

24 year old left back George Wells signs for the Magpies a matter of weeks after competing in the National League South play-offs for our neighbours Slough Town. Wells – previously with Hampton and Kingstonian – made 143 appearances for the Arbour Park side and was voted Rebels Supporters Player of the Year at the end of his debut season in 2017/18.

Lee Devonshire was delighted to bring another two new faces to York Road, telling us exclusively: “Dan Sparkes is someone we have worked with before as we gave him his first opportunity at this level when we were at Braintree. A left footed wide man who will give us great quality delivery from wide areas for our strikers that we have probably missed since Sam and Harry left the club. Sparksie is a great lad also who has played with some of the group before and we are really pleased to get this over the line. George is someone we have watched for the last few years and has been very good for Slough Town in that time. A left full back with a wand of a left foot and great ability in general. He is a good size as well and at 24 is at a great age to step up and test himself at the higher level. We look forward to working with him.”

As well as the two new boys, we are also delighted to confirm that Josh Kelly has signed a contract with us ahead of the new season. ‘One-of-our-own’ Josh graduated through the successful MUFC Academy and has grabbed the headlines over the past two seasons with a number of virtuoso goals. We look forward to seeing Josh continue to progress with us and we wish him and Dan and George the very best of luck for the coming season at York Road.