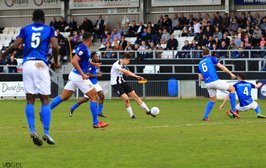 Maidenhead United are proud to announce the transfer of Maximilian Kilman to Premier League Wolverhampton Wanderers for an undisclosed fee on deadline day.

A graduate of the Magpies youth team who was signed for the Under 18s by Sam Lock, Maximilian only established his place in the first team squad last season after impressing in August whilst deputising for the injured Rene Steer at left back. A versatile player who can fill in across the defence and midfield, Maximilian scored his first goal for United in spectacular fashion with a last minute strike from distance to defeat promotion-chasing Dover in April.

Kilman is a current international with the England Futsal team who started a total of 34 matches for the Magpies, named as a substitute on a further 20 occasions. Maximilian is very well thought of by all at the club and Maidenhead United congratulate this bright young prospect on an exciting move. We look forward with relish to following his future progress, best of luck Maximilian!