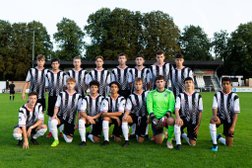 By York Road PA
10 May
Share via
FacebookTwitter
https://www.pitchero.com/clubs

Maidenhead United's Under 18 side has once again enjoyed a magnificent season and before the campaign was brought to a premature end the team were flying high in the Allied Counties League. The Young Magpies had also equalled the club record best ever FA Youth Cup run to the Third Round proper, matching the achievement of the previous season and in January Alan Devonshire fielded an entire side of Academy prospects for the Berks & Bucks Senior Cup tie against neighbours Marlow. To cap off a season of triumph, Fred Chapman and Taro Chitepo were selected for the England FA College's squad.

On Friday 8th May, the team held their annual presentation evening via the video conferencing website Zoom and the following awards were handed out:

Joint manager Christian Parker reflected on the season: "So tonight saw us sign off the season in the strangest of ways due to the current lockdown, but it was something I felt we needed after the commitment the boys have shown over the last two years I have been in charge.

It was also an opportunity for me to thank the parents and players for their efforts during the season, reward the players with a variety of awards and sign off as Maidenhead United U18’s Manager for the last time.

I have been with the club for three years and have thoroughly enjoyed my time, getting to know the many wonderful volunteers that keep the club going on match days and beyond. I’d like to personally thank those who have helped me, I won’t name them all as there are too many and I wouldn’t want to miss anyone out as that wouldn’t be fair. The club is restructuring the Youth setup for next season and I feel that now is the time for to move on and hopefully gain some further experience with a Senior Club.

There have been many memorable moments during my time here, but the two that stick in my mind have to be Nottingham Forest at home last season and Oxford United away this season. Both of those games were in the 3rd Round proper of the FA Youth Cup, the first time in the club's youth team history that it had reached this level. This is something I will remember for the rest of my life, but I have the boys to thank for that. This was clear when Karl Robinson spoke to the boys after the Oxford United game in December, telling them he didn’t expect us to be as good as we were and that they were a credit to the club.

I do walk away with one regret and that’s not picking up a trophy in two years. I knew I had big boots to fill when taking on the role and although we may not have won anything I feel we have still achieved good things by developing a number of players for the first team. Some of these players were already at the club and some we have brought in, either way we have developed them for the last two years and helped them in their first steps into senior football.