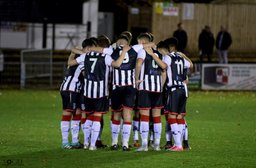 Under 18s have Cup Final Date

By York Road PA
7 May 2019
Share via
FacebookTwitter
https://www.pitchero.com/clubs

Maidenhead United Under 18s will be looking to sign off their season with some deserved silverware when they face Flackwell Heath in the Allied Counties League Cup Final at Windsor on Wednesday 8th May, a 7:45pm kick off at Stag Meadow.

The Magpies Youth have enjoyed a record breaking season, reaching the Third Round on the FA Youth Cup for the first time ever when they hosted the Academy team of Nottingham Forest. There was disappointment however when a late run from Hanworth Villa ensured that the lads were to be runners up in the Central Division of the Allied Counties League.

Joint manager Christian Parker is looking forward to the League Cup Final and is hoping that his team can end the season well: "The lads have done well as a squad to reach the final this year and have achieved a lot with the FA Youth Cup success and finishing 2nd in the league.
Some silverware now would top off a very good season and it would be great to think that we might bring some support across to Windsor to help the boys in a difficult tie".

Admission at Stag Meadow will be £4 for adults, £2 concessions.