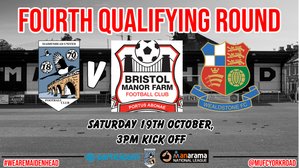 Up For The Cup | Stones to visit York Road

Maidenhead United’s FA Cup campaign will start at York Road on October 19th when we face Wealdstone following the draw for the 4th Qualifying Round held live on Talksport 2.

Southern League Division 1 South outfit Bristol Manor Farm were held to a goalless draw by Vanarama National League South leaders Wealdstone at The Creek on Saturday. 422 watched on as The Stones' Ross Lafayette saw a penalty saved in the second half meaning the teams replayed at Grosvenor Vale on Tuesday night, the Stones winning 4-0 to earn the right to visit York Road.

The Stones of course are regular adversaries of Maidenhead, last coming up against us over four matches in league and cup in our title-winning season of 2016/17. Their last FA Cup visit to York Road however was way back in 1932/33 when Maidenhead triumphed by four goals to nil.

News of admission prices and confirmation of date and kick off time will follow in due course.