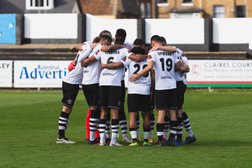 Alan Massey’s red card turned the tide of the match in Rotherham’s favour in the FA Cup first round this afternoon.

Jake Cassidy earned the Magpies a shock lead against the side two divisions above them, but following their captain’s dismissal, Michael Ihiekwe, Freddie Ladapo and Matt Crooks scored to knock the hosts out.

The League One side put themselves into the second-round pot to avoid a giant killing, whilst the hosts were spirited but once again failed to reach the next stage of the competition.

The Berkshire side made one change from the 2-0 defeat at Aldershot last weekend, as Rene Steer came in for Danny Whitehall to give them more of a defensive shape.

Maidenhead began brightly and full of energy, and Josh Smile’s cross eventually fell to Josh Kelly, but his speculative early volley flew over.

But the Millers started to control the play and went close just before the quarter-hour mark. Chiedozie Ogbene fired a powerful high shot from outside the penalty area, but it just failed to hit the mark. They looked to find the lead again as Carlton Morris’ free-kick dipped wide from a promising position.

Maidenhead were able to strike first in the game though and broke the deadlock in the 25th minute. From the right, Ryheem Sheckleford clipped an inviting loose ball forward towards Jake Cassidy, and he delicately guided the ball into the bottom right corner with his left foot. The ball broke kindly to the striker in the penalty area, and he put his side into dreamland.

Moving ahead, and Rotherham responded quickly with Smith’s tame shot being met by Chris Dunn.

They then came close to an equaliser just prior to the half-time break. The ball sat up nicely for Morris, but Dunn kept him out with an important save to preserve the hosts’ lead. Billy Jones volleyed it over on the rebound.

To lead a League One side at half-time was a real testament to the strong mentality of Alan Devonshire’s side. The difficult task was to preserve this for another 45 minutes.

The second-half began in a similar light, as Rotherham maintained their strong attacking pressure. The Magpies held firm, but the match turned 10 minutes into the second period.

Massey was shown a straight red card following a recklessly timed challenge on Wiles, which left Devonshire’s side defending their slender lead with a man disadvantage. Aron Davies was substituted in to deputise Massey’s position.

In what was a crucial nine-minute spell, the Millers were able to score three times to give themselves a cushion in this game.

After constant defending, Maidenhead’s defensive resistance was finally broken down in the 69th minute. Unable to shoot himself under pressure from the Maidenhead rearguard, Ladapo teed up Michael Ihiekwe, and he fired the ball into the bottom left hand corner easily.

Ladapo got himself in on the act to put the visitors ahead, as he cut inside from the left onto his right foot until he was forced to switch it back to his left again. He struck it well, and it went through Dunn into the bottom right with enough power.

The comeback was complete in the 78th minute as Matt Crooks seemed to put the game beyond any reasonable doubt.

Jake Hastie capitalised on a weak Seth Twumasi clearance to square the ball across in the area, and the Englishman wasn’t going to miss as he finished it off well.

Into the last few minutes and a Rotherham fourth was more likely than a Maidenhead comeback as Wiles hit the crossbar with an effort from distance.

With the final whistle signalling the end of Maidenhead’s FA Cup run, it was a case of what could have been. They did well to contain a League One side for so long, and will look ahead to the Boreham Wood trip next weekend in the league. To avenge the defeat at Aldershot will be the next target. Rotherham though will travel to Sincil Bank in midweek for the Football League Trophy.