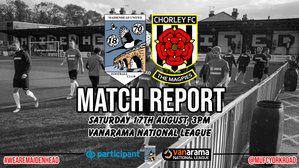 Alan Devonshire’s Magpies were looking to bring the delight of their away form to York Road as fellow Magpies, Chorley FC, came to town.

The first chance fell to the travelling side. Adam Blakeman providing a cross from the left to pick out Josh O’Keefe who can only head wide.

As affairs looked even inside ten minutes, both teams were keen to maintain possession and break on the counter-attack.

Another chance for the visitors to find a breakthrough came on the twelfth minute. Marcus Carver found himself in front of Taye Ashby-Hammond’s goal, he took a scuffed shot but the Maidenhead keeper gathered the ball comfortably.

Despite the attacking prescence of the away side, mid-week goalscorer Josh Kelly found himself in the perfect position to bury the ball past Crellin in the Chorley net. The Southern Magpies took the lead.

Moments after the restart, the Chorley men were on the attack and found themselves an immediate response with Carver capitalising on the opportunity and slotted past Ashby-Hammond. 1-1.

The first half drama didn’t end there. Bernard Mensah was brought down in the box and the referee pointed to the spot.

Jake Cassidy made no mistake and Maidenhead retook the lead before the break.

On the stroke of the half time whistle, Cassidy had a chance to double his goal tally. This time the ball pinged around in the area, found him in space, but he could only send his attempt flying over the crossbar.

The first half energy failed to rub off. The opening chance fell the way of our visitors. A cross from Carver finding skipper Andy Teague poised in front of goal but he failed to get a touch of the ball.

A chance for Alan Devonshire’s men to add to their advantage came moments after. Mensah was on hand to loop the ball in the path of Ryan Upward who was running towards Crellin’s goal but he failed to reach the ball.

The referee then pointed to the spot for the second time in the game. This time saw a challenge from Alan Massey on Alex Newby and it was Mepham-Walters to take. The Chorley man was denied by the heroics of Ashby-Hammond and the score remained 2-1.

Kelly continued to look bright on the ball, finding numerous openings but his deliveries were dealt with well by the Chorley defence.

After a flurry of substitutions from both sides, Danny Whitehall became a super sub for the home side. He met a pin point cross from fellow substitute Shamir Fenelon and increased the advantage to 3-1.

Within two minutes the Maidenhead forward had doubled his goal total for the day, finding myself one-on-one with the visiting keeper and calmly finishing. 4-1 to the Southern Magpies.

Alan Devonshire and his men got their first win of the 2019/20 campaign and will look to continue this form when we visit Yeovil Town next Saturday.