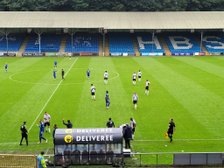 Match Report | Maidenhead Get A Little Extra From Halifax

Alan Devonshire’s men made an impressive start to the season with a come-from-behind victory in West Yorkshire thanks to a late intervention by a substitute.

The home side were only denied a play-off place on the final day of last season when former Magpie Nathan Tyson scored a controversial late winner for Chesterfield and they started brightly in this one. But it was Maidenhead who had the clearest chances as Shaymen stopper Sam Johnson rushed off his line to deny Remy Clerima who only had the ‘keeper to beat when fed by the lively Josh Kelly. Minutes later Kelly himself was sent clear, danced around Johnson but could only find the side-netting from a tight angle.

The Shaymen punished Maidenhead profligacy with the opening goal after twenty six minutes. It was a fine break led by the impressive Jay Benn who pulled the ball back for Billy Waters to score at the far post. Harvey Gilmour came close for the home side before the break but Maidenhead would make it a stunning turn-around after the break.

Josh Kelly was denied by the legs of Johnson early in the second period as the Magpies turned the screw and it was no surprise to see Kelly involved in the equaliser as he pulled the ball back from the right. Alan Massey’s shot towards goal was blocked by Johnson, Remy Clerima could not put the loose ball into the net but Sam Barratt was on hand to thrash a first time effort into the top corner.

Tails up and demonstrating their pre-season fitness work, Maidenhead looked the more likely to nick the game in the final stages of an exciting match and that is just what they did in the final minute of the ninety prior to five minutes of stoppage time being added by referee Mr Marsden. The hosts were perhaps masters of their own downfall as Luke Summerfield conceded possession to Kane Ferdinand who fed fellow substitute Emile Acquah. The young forward saw his shot blocked but the rebound fell to Ferdinand who picked out the top corner on debut from the edge of the area to win it.

Assistant Manager Ryan Peters was able to celebrate his birthday in style and remarked afterwards: “The first half was a little bit sticky but the gaffer got in and spoke to the boys and the second half was miles better.”