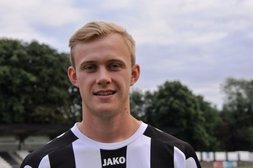 Fresh from his 21st birthday and now in his 3rd season at the club we caught up with Sam.

Q: First things first, did that shot at Dartford cross the line?

Sam: My old man filmed it, we tried to look and check but the angle wasn’t clear. A lot of our fans have told me it was in, I would have happily taken the goal – think we need goal line technology in non-league!

Q: We’ve had a fantastic start and fans are starting to get excited. What’s been the main difference this year?

Sam: We’re not doing too much different. We did well last year and have gelled as a team over that time, understanding each other’s play and what the manager wants.

Q: Any particular turning point for the run of form?

Sam: Pre-season we played well together and were confident coming into the season. The away comeback win at Whitehawk definitely helped us realise our potential and how we could push on this season.

Q: How did the summer additions help the team?

Sam: More depth and experience, with a lot of players coming in who’ve played at high levels. Marks has obviously settled right in linking up with Tarps. Cox was unlucky with his injury at the start of the year but he’s come back strongly and it’s good to have people fighting for their shirt. Comley and Hammond have done very well for us too.

Q: Favourite moment as a Magpie?

Sam: It’s got to be the FA Cup run last year. The atmosphere at York Road during the replay was unbelievable and it was amazing to be a part of it.

Sam: There’s a good buzz around the lads and for the game on Saturday. We know it will be a real test, especially away, but everyone’s ready to put their all in and hopefully we can come back with three points.

Q: If you could play one team at their ground, who would it be?

Sam: I know Pents said it, but it would have to be Chelsea at Stamford Bridge!

Q: Favourite footballer of all time?

Sam: Ronaldinho. Loved his creativity and his personality both on and off the pitch.

Sam: Might get killed for this…but I’d say Lord of the Rings or Star Wars.

Sam: Just waiting for that next series of Game of Thrones to come out…

Q: What do you do outside of football?

[i]Sam: I’m an artist that works on a commissioned basis. This is perfect for me as it also gives me a lot of freedom to work on my fitness outside of the club.
I create original artwork to the customer’s order, custom tattoos designs and custom hand painted trainers.