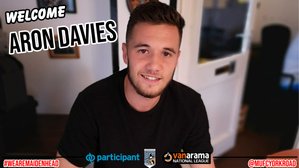 Maidenhead United are delighted to announce the signing of defender Aron Davies.

Aron joins us after leaving Fulham under 23s back in July.

He began his career at Bristol City, playing within their youth set-up, before moving to West London in 2016.

The defender gained National League experience last season when he made a loan move to Maidstone United; making 14 appearances in the 2018/19 season.

Davies has made six EFL Trophy and over 50 Premier League 2 appearances so far in his career.

“Aron comes from a great background and another ex Fulham player who we seem to have a few of now.”

“We know of his ability from his time at Maidstone United at the end of last season and he has really impressed us all with his pre-season performances.”

“He has shown his versatility as he is comfortable in midfield and centre-back and we feel he will be a welcome addition to the group, and a big plus for us moving forward.”