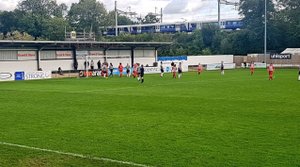 Maidenhead United’s interest in the Women’s FA Cup came to an end after defeat at the first hurdle to Eastern Region Women’s Premier League side Bowers & Pitsea who caused something of an upset against higher ranked opponents.

The visitors probably deserved the narrow lead that they took into the break, albeit Maidenhead started well. ‘Skipper Alex Dover floated in a free-kick which narrowly evaded Steph Nelson at the far post before Le Cumbre’s cross was scuffed towards goal by Nelson with the impressive visiting ‘keeper Violet Hickman able to gather the ball with comfort. The visitors however led in the sixth minute. Ebony Moore’s cross from the right was turned into her own net at the near post by the unfortunate Sarah Thompson.

This early boost gave the Essex side real confidence and they went close to extending their lead; Mili Lewis crashed a long range effort narrowly over, Sophie Dowman side-footed a good opportunity wide at the far post following a corner and then Ellie Parker had to be alert to rush off her line to deny Yasmin Cowley. Simon O’Brien’s effort from range clipped the top of the crossbar before Moore stretched at the far post to stab a Megan Harley cross wide for Bowers. Maidenhead ended the half on top; Steph Nelson brought a pass down well only to strike her effort wide before a brilliant double save from Hickman kept out Ellie Vietz.

Playing down the slope in the second half, Maidenhead at last put some concerted pressure on the hard-working visitors. Ellie Parker made a fine save at full stretch in the opening minute of the half but from then on it was mainly Maidenhead on the offensive. Simone O’Brien was close to latching on to a long ball and then Danielle Styles was grateful to her goalkeeper Hickman after her sliced clearance was parried over the bar to prevent a Maidenhead equaliser. Nelson was denied by a fine save by Hickman and a string of Maidenhead corners in the swirling wind gave the visitors plenty to think about.

Cup football however can be cruel and midway through the second half on a rare break away Sophie Dowman tried her luck from range. The strike took a deflection and looped high over the helpless Ellie Parker and into the Bell Street goal. Maidenhead came straight back on the attack with Alex Dover and Amber Langston-Lloyd combining well to set up substitute Shylla Carty-Duhaney whose header was well dealt with by Hickman before Simone O’Brien’s corner was flicked on by Nelson with a Bowers defender hacking the ball away from the goal line and it looked at this stage that Maidenhead had far too much to do to save this game against tireless opposition.

With time running out, Alex Dover struck a fine free-kick towards goal, the ball bouncing back off the crossbar and then off Hickman’s back into the back of the net to give Maidenhead hope. More pressure was exerted on the Bowers defence who stood firm to earn their place in the next round of the competition; an outcome which no-one would begrudge them celebrating in enthusiastic style. A disappointed Maidenhead team must now raise themselves for cup matches on the next two successive Sundays; an FA Women’s National League Plate tie at Cambridge United on Sunday 13th October and a County Cup visit to Woodley on Sunday 20th.