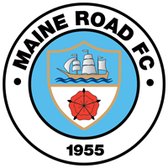 RESERVES GET BACK TO BACK VICTORIES

Today we head up the M6 to Wigan as we visit Winstanley Warriors, the reverse fixture ended 5-5 after an entertaining game. The youngsters will be looking to build on last week’s result and get back to back victories for he first time this season

Maine Road kick off up the hill. 2mins Tom Keyworth on a good run down the right wing beats the left back and puts a good cross in but nobody met it in the box. 8mins Winstanleys first venture into the Maine Road half sees them force a corner which is headed clear by Ryan Smith and the No.5 hits an optimistic effort from 30 yards comfortably saved by Jake Howarth. 9mins Owen Pollitt gets back well to win the ball in the middle then finds midfield partner Joe Simms who picks out Tom Keyworth and a good pass switches play to Christy OBrien who cuts in from the left and drives inside the box as the shot hits the side netting, the early minutes have seen Maine Road on top and playing some nice football. 11mins the No.7 shows good feet in the centre and then unchallenged runs at the back four but Finn Thompson stands up well and blocks the shot. 17mins Maine Road are on the attack again as a Christy OBrien shot is deflected for a corner which is headed just wide by Ben Davison. The game is end to end at the moment but both back fours are quick to deal with any threat but its Maine Road who look the likelier to score and should have done on 30mins as great football sees Joe Simms pick out Christy OBrien who cuts across the edge of the box before slipping the ball in behind for Ben Davison who switches the ball on to his left foot as the keeper does well to tip the shot over the bar. We don’t have to wait much longer for the breakthrough as Owen Pollitt drives a pass into the feet of Ben Davison on 36mins who holds the ball up well before slipping the ball in behind for the run of Tom Keyworth and a well driven shot across the keeper finds the back of the net for a well deserved lead (0-1). With the game very much in the control of Maine Road we gift Winstanley a goal on 40mins as Jake Howarth plays a goal kick out to right back Tom Markham who opts to pass back to keeper as the No.8 reads it well and nicks the ball from the path of Jake Howarth and runs it in to an empty net (1-1) and a mistake looked the only way Winstanley were going to score. 42mins back up at the other end a short corner sees Joe Simms return the ball back to Christy OBrien and the shot curls over the bar. On the stroke of half time Maine Road should have taken the lead back as Tom Markham plays a one two with Tom Keyworth and picks out the run of Owen Pollitt inside the box and the shot goes wide.

A good 1st half and disappointed not to have gone in at the break ahead. The 2nd half needed to be as good as we need to take advantage of the downhill slope.

50mins Owen Pollitt picks up a yellow card. 60mins Joe Simms is replaced by Joe Rothwell and 70mins Tom Markham is replaced by Jake Hurst. The first 25mins of the 2nd half has had nothing to report and has been a scrappy affair, Maine Road aren’t helping themselves as they turn over possession far too cheaply and are 2nd to the ball although Winstanley are failing to take advantage of the sloppy play as the back four defend really well and break down any attack that comes their way. We have to wait until 73mins for a decent attempt and it comes Maine Roads way as Joe Rothwell puts Ben Davison away who gets the better of the defender and puts a lovely ball across the 6yard box, but nobody follows up for what would have been a tap in but signs of encouragement for the first time in the 2nd half. 75mins James Ormrod picks up a yellow card. 76mins Tom Keyworth finds Christy OBrien who lays back outside the box for Joe Rothwell to hit a good strike but straight at the keeper. He game has turned all in the favour of Maine Road over the last 5mins as we keep better care of the ball and deservingly take the lead on 80mins as Ben Davison releases Owen Pollitt on the run and one on one with the keeper finishes well (1-2). A minute later it should have been 3 as Christy OBrien on a good run from just over the half way line beating a couple of players and one on one with the keeper tries to chip rather than shot and a golden opportunity to kill of the game. 85mins the No.7 picks up a yellow card for a foul, Tom Keyworth delivers the free kick as Ben Davison gets up well to head just wide. Before the goal kick Ben Davison is replaced by the returning Joe Simms. 87mins and Christy OBrien gets his reward for a good performance as he is away clear on the counter attack and one on one with the keeper makes no mistake this time and finishes well (1-3). 88mins Owen Pollitt is replaced by the returning Tom Markham as Maine Road see out the game