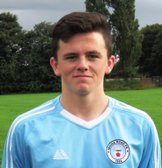 CHRISTMAS HANGOVER FOR THE RESERVES

Today is a welcome to change to the norm as this is the first time the Cheshire League have had games in between Christmas and New Year and despite some poor weather the Maine Road pitch has passed the morning inspection as we welcome Blacon Youth to Brantingham Road.

Blacon Youth kick off towards the Brantingham Road end but it is Maine Road who were unlucky not to take the lead inside the first minute as Christy OBrien picks the ball up and drives down the left wing before cutting inside and hitting a curling shot beating the keeper and only to be denied by the far post. 6mins No.9 gets in behind and one on one draws a great save from keeper Jake Howarth. 17mins a quick free kick splits the defence for the No.11 and heading towards goal Ryan Smith does well to cover round the back and puts in a great block to deny No.11 a sure goal. 20mins Rhys Clooney picks the ball up out wide and shows good strength and pace to get around the defender and drives into the box before laying back for Owen Pollitt but there is no power on the shot and is comfortably saved and this has been the best chance of the game up to now. The game is quite even but Blacon Youth have settled the better of the teams as Maine Road are inviting pressure as they regularly give the ball away or make the wrong choice with the pass whilst Blacon Youth are using the width quite well and causing us problems down the flanks and were unlucky not to have taken the lead on 32mins as the No.11 again gets down the wing and cuts inside and miss hits his shot which loops in the air to the back post as the No.9 gets up well to head back across keeper Jake Howarth and the ball goes in off the post but with the referee too far back he couldn’t know whether the ball crossed the line or not and waved play on although in the true spirit of sportsmanship keeper Jake Howarth admitted the ball had crossed the line so a huge let off for the blues and hope they now turn that bit of luck into an advantage. 34mins a Christy OBrien free kick is headed clear as Joe Simms volleys back high over the bar. 35mins Maine Road make a change as Joe Simms is replaced by Martin Owen as we look to tighten up in the midfield. The half comes ot an end with no further chances

We competed for 45mins as we scrapped and battled for the ball without playing any real decent football and with both teams having a few clear chances a draw was just about the right result at half time. We emphasised we wanted more care when in possession and needed much more from midfield both in defence and attack as we only looked dangerous when Christy OBrien was on the ball and we were allowing the opposition to dominate this area of the pitch without much fight.

Before the start we make a change as Jake Hurst is replaced by Ben Davison. 46mins (not sure what happened as I was still in changing room) but a ball splits our centre halves and No.9 finishes well past Jake Howarth and not the start we wanted (0-1). 57ins the No.8 draws the defence before slipping the ball in behind for No.17 and one on one and under no pressure should have done better but another top save from Jake Howarth keeps the score as it was. 59mins the No.7 waltzes through the midfield without a single challenge and shoots wide from the edge of the box. 62mins Jack Thompson is replaced by Martin Orr as we go 3 at the back to try and get us forward as we haven’t started in the 2nd half as Blacon Youth are on top and even when we get into the final third they defend really well with 9 men behind the ball and just crowd us out before picking up the loose ball. 65mins we finally get a chance as Rhys Clooney gets in behind and crosses for Jack Ryan to shoot wide. 75mins Blacon Youth had a clear chance to double the lead as they hit us on the counter attack and No.11 clear away shoots wide and we make a change before the restart as Chris Hirst is replaced by Jake Hurst. 80mins Ben Davison still struggling with illness is replaced by Joe Simms. 82mins Blacon Youth get their reward as some wonderful skill from No.15 as he runs and dribbles past everything that comes at him and having drawn everyone towards him puts a ball across the 6 yard box for the No.17 to tap into the empty net (0-2) and you couldn’t deny they were worthy of the lead as we weren’t putting up much of a fight, there was little movement off the ball which forced us to start passing sidewards and backwards which always causes us problems and plays straight into the oppositions hands. 88mins Maine Road get a consolation goal as Owen Pollitt puts a ball over the top for a well timed run from Rhys Clooney who volleys back across the keeper (1-2)

A poor 2nd half as we lacked any desire to grab hold of the game and take it to the opposition, We have beaten better teams than this over the last few outings but Blacon Youth are a big, strong and experienced team and sometimes you have to accept it was men v boys today in the centre of the pitch as we were far to lightweight in midfield today