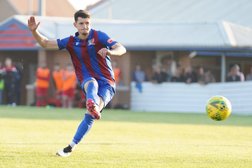 Taylor, joined the Jammers in the Summer of 2021 following his release from Charlton Athletic and has been a regular for Wayne Brown's side throughout the campaign so far making a total of thirteen appearances, recording two assists in the process.

H, as he is known to his team-mates has been travelling to Park Drive from Surrey and recently has received an opportunity much closer to home, which he has decided take on.

Everyone at the club would like to thank Harry for his services whilst with the club and we all wish him the very best for the future.